It was all he heard…
it was all he felt…
it was all he wanted to do…
every morning, every night,
the drummer felt a longing,
and the beat was the only cure…
over and over again,
the drummer played the rhythm
of his favourite beat in his mind,
with the fingers of his hands,
and every time that he tapped his feet…
it was as if it was his own heart beating…
it was as if it was his own pulse racing…
it was the most epic sound
he had ever heard in his life,
since he was a baby
and he used to look out his bedroom window
and listen to the thundering sound
of the pita-patter on the window-pane
when it was raining…
it was more powerful
than any kind of hunger or craving…
to Mark, the music was like the heart-beat of God…
to Mark, the music that came from his soul
was something that was transcendental…
to Mark, the music was what kept him
from becoming among humanities lost…
to Mark, the music he heard was what he loved…
and to him it was beautiful.

Becoming a member of a marching-band
had been a dream of Mark’s since he was a child –
Mark had everything that any band
would ever want, or ever need: Mark loved music,
and he loved his favourite instrument…
even as a child Mark would turn his parents’
pots and pans into home-made drums,
and he used to play them,
and his parents let him be free
and express himself, and go wild –
and if anybody came around to visit
Mark and his parents
they would see and hear
Mark playing the most phenomenal of beats,
and every day of his life
music, especially his music,
has become more and more important.

Mark tried-out to be in his high-school band…
Mark had dreams of one day playing
in the marching-band of his favourite
college football team…
Mark played and practiced every minute
he was awake or asleep,
and he knew that it he just played
with all his heart
that everything in his life
would happen as he always dreamed it would,
as if it were all a part of a plan –
however, all Mark could play,
all Mark wanted to play,
all Mark loved to play
was the beat that he heard within…
and when his moment came
to show just how incredible a player
and a drummer he was Mark froze…
and then he did what he always did –
he played the music that he knew and loved.

Mark never made it into the marching-band…
Mark was disappointed to not be able to play
and march in front of his favourite football team –
but he wasn’t sad…
to lift his spirits, Mark’s parents ordered him
a band-uniform all of his own and they told him to
“never stop playing” the music that made him
the most happy and the music he had always known…
Mark’s parents told him to go out in his uniform,
with his drum, and “fill the world” with his music
that to them was like no other –
and that is exactly what Mark did:
he went out…
he walked down the main street
of his home town’s most busiest road…
he stopped people and traffic
to a stand-still everywhere he went…
and as he played he knew
that because of his music
he would always be remembered
as the boy, and later the man,
who would always be known as
“The Drummer”. 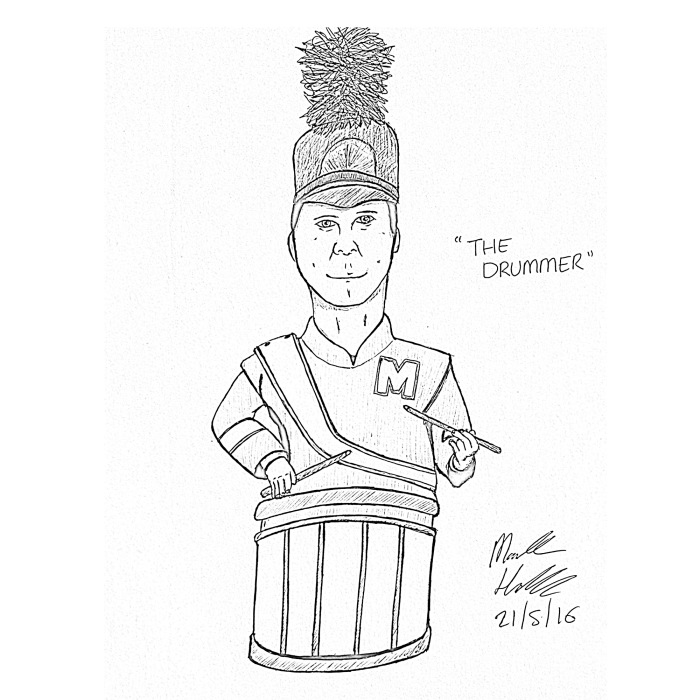